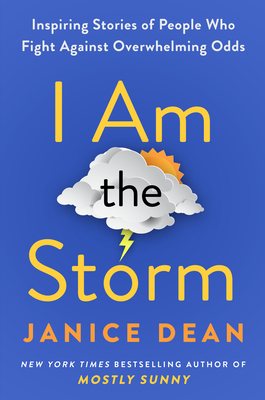 After her acclaimed memoir, Always Sunny, Janice Dean figured she was done trying to survive or bring down awful men. Then she found herself taking on Governor Andrew Cuomo on social media and then at rallies. What at first seemed like a futile fight ended with Cuomo’s historic resignation. But it caused Janice to wonder: What fuels someone’s resolve to go up against a powerful opponent? And how can ordinary people make the world a better place?

In I Am the Storm, Janice shares the stories of others who stood like David against Goliath, choosing to fight for what was right rather than take the easy path. In the book, she shares stories from ordinary people doing extraordinary things, such as:

*a mother taking on the opioid crisis after her daughter dies

*a gymnast working to reform a broken and abusive system

These and other true stories will reveal what it takes for real people to go through life’s storms. And sometimes, those storms leave permanent damage. You may need a box of tissues as you read about a veteran who lost his hearing and sight to an IED, or a Minnesota mom who took up the fight against the opioid epidemic after losing her own daughter. But even in our darkest seasons, Janice shows, we can still have hope, resilience, and perseverance. I Am the Storm is an uplifting call to be brave like David no matter what Goliaths we face.

Janice Dean is the New York Times bestselling author of Mostly Sunny and Make Your Own Sunshine as well as a series of children’s weather books, starring Freddy the Frogcaster. She serves as the senior meteorologist for Fox News and is the morning meteorologist for Fox and Friends. She also hosts the Janice Dean Podcast and has covered not only historic storms but also some of the most iconic events across the country, including the Kentucky Derby, the Westminster Kennel Club Dog Show, and Groundhog Day. She was also an official judge at the Nathan's Famous Hot Dog Eating Contest in Coney Island, New York. Janice lives in New York City with her husband and two children.

I Am the Storm: Inspiring Stories of People Who Fight Against Overwhelming Odds (Hardcover)