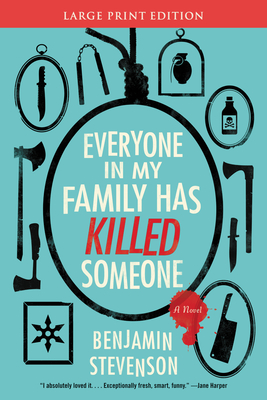 By Benjamin Stevenson
$34.00
Email or call for price

“This is the best mystery I’ve read. The narrator understood that just because he was telling the story, it didn’t make the story about him. Every member of this family was given a story arc that also directly connected to the whole! So good!”
— Hannah Oxley, Mystery to Me, Madison, WI

Knives Out and Clue meet Agatha Christie and The Thursday Murder Club in this “utterly original” (Jane Harper), “not to be missed” (Karin Slaughter), fiendishly clever blend of classic and modern murder mystery.

Everyone in my family has killed someone. Some of us, the high achievers, have killed more than once. I’m not trying to be dramatic, but it is the truth. Some of us are good, others are bad, and some just unfortunate.

I’m Ernest Cunningham. Call me Ern or Ernie. I wish I’d killed whoever decided our family reunion should be at a ski resort, but it’s a little more complicated than that.

Have I killed someone? Yes. I have.

EVERYONE IN MY FAMILY HAS KILLED SOMEONE

Benjamin Stevenson is an award-winning stand-up comedian and author. He has sold out shows from the Melbourne International Comedy Festival all the way to the Edinburgh Fringe Festival and has appeared on ABCTV, Channel 10, and The Comedy Channel. Off-stage, Benjamin has worked for publishing houses and literary agencies in Australia and the USA. He currently works with some of Australia's best-loved authors at Curtis Brown Australia. He is also the author of Greenlight (shortlisted for the Ned Kelly First Fiction Award) and Either Side of Midnight.

“I absolutely loved it. Utterly original, hugely entertaining, and a must-read for every fan of the mystery genre. What an exceptionally fresh, smart, funny book—I’ve never read anything like this before.” — Jane Harper

"As fresh and zingy as a salted lime. It's Knives Out meets Richard Osman. Or Dexter by way of Agatha Christie. Or Schitt's Creek with a body count. It's also the most luxuriantly enjoyable novel I've read in years. And years. I began toting my copy around town so that strangers would ask me about it -- who could resist that title? I only wish there were more members of the Cunningham clan, so that this raucous, matchlessly entertaining mystery could go on longer. Benjamin Stevenson, I’ve got a lot to learn from you." — AJ Finn

“Everyone in My Family Has Killed Someone is a jaunty and clever mystery with unexpected twists. Absolutely not to be missed.” — Karin Slaughter

“I absolutely LOVED it. It’s so engaging, entertaining and charming. I don’t think I’ve ever read anything like it. It was SUCH a fun read.”  — Marian Keyes

"Some readers are drawn to mysteries because they love the formula and logic—this one’s for them. ... This book and its author are cleverer than you and want you to know it." — Kirkus Reviews

"Exceptionally clever and amusing. ... Stevenson carries off this tour de force with all the aplomb of a master magician who conducts his tricks in plain view."? — Publishers Weekly (starred review)

Everyone in My Family Has Killed Someone: A Novel (Large Print / Paperback)