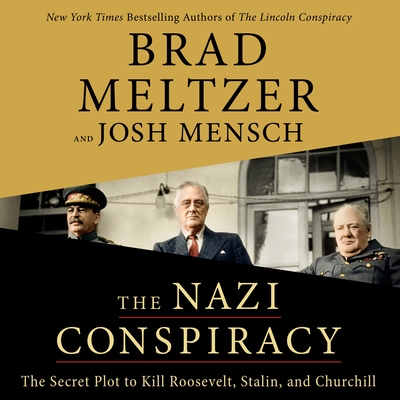 From the New York Times bestselling authors of The First Conspiracy and The Lincoln Conspiracy comes the little-known true story of a Nazi plot to kill FDR, Joseph Stalin, and Winston Churchill at the height of World War II.

In 1943, as the war against Nazi Germany raged abroad, President Franklin Roosevelt had a critical goal: a face-to-face sit-down with his allies Joseph Stalin and Winston Churchill. This meeting of the Big Three in Tehran, Iran, would decide some of the most crucial strategic details of the war. Yet when the Nazis found out about the meeting, their own secret plan took shape—an assassination plot that would’ve changed history.

A true story filled with daring rescues, body doubles, and political intrigue, The Nazi Conspiracy details FDR’s pivotal meeting in Tehran and the deadly Nazi plot against the heads of state of the three major Allied powers who attended it.

With all the hallmarks of a Brad Meltzer and Josh Mensch page-turner, The Nazi Conspiracy explores the great political minds of the twentieth century, investigating the pivotal years of the war in gripping detail. This meeting of the Big Three changed the course of World War II. Here’s the inside story of how it almost led to a world-shattering disaster.

BRAD MELTZER is the #1 New York Times bestselling author of The Lightning Rod, The Escape Artist, and over ten other bestselling thrillers, as well as the Ordinary People Change the World series. He is also the host of the History Channel TV shows Brad Meltzer’s Decoded and Brad Meltzer’s Lost History, which he used to help find the missing 9/11 flag that the firefighters raised at Ground Zero.

JOSH MENSCH is a New York Times bestselling author and documentary television producer with a focus on American history. He is co-author with Brad Meltzer of The First Conspiracy: The Secret Plot to Kill George Washington and The Lincoln Conspiracy: The Secret Plot to Kill America’s 16th President. For television he has written, directed, and produced nonfiction series for PBS, the History Channel, and other networks. He lives in Brooklyn, New York, with his family.

Scott Brick first began narrating audiobooks in 2000, and after recording almost 400 titles in five years, AudioFile magazine named Brick a Golden Voice and “one of the fastest-rising stars in the audiobook galaxy.” He has read a number of titles in Frank Herbert’s bestselling Dune series, and he won the 2003 Science Fiction Audie Award for Dune: The Butlerian Jihad. Brick has narrated for many popular authors, including Michael Pollan, Joseph Finder, Tom Clancy, and Ayn Rand. He has also won over 40 AudioFile Earphones Awards and the AudioFile award for Best Voice in Mystery and Suspense 2011. In 2007, Brick was named Publishers Weekly’s Narrator of the Year.

Brick has performed on film, television and radio. He appeared on stage throughout the United States in productions of Cyrano, Hamlet, Macbeth and other plays. In addition to his acting work, Brick choreographs fight sequences, and was a combatant in films including Romeo and Juliet, The Fantasticks and Robin Hood: Men in Tights. He has also been hired by Morgan Freeman to write the screenplay adaptation of Arthur C. Clarke’s Rendezvous with Rama.

The Nazi Conspiracy: The Secret Plot to Kill Roosevelt, Stalin, and Churchill (CD-Audio)