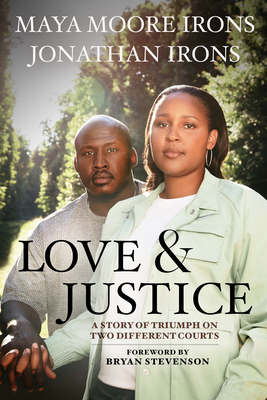 
In the tradition of Just Mercy, an inspirational memoir by WNBA star Maya Moore Irons and her husband, Jonathan Irons, who she helped free from a wrongful conviction.

A journey for justice turned into a love story when Maya Moore, one of the WNBA’s brightest stars, married the man she helped free from prison, Jonathan Irons.
Jonathan was only 16 when he was arrested for a crime he did not commit. Maya Moore’s family met Jonathan through a prison ministry program in 1999 and over time developed a close bond with him. Maya met Jonathan in 2007, shortly before her freshman year at the University of Connecticut, where she became one of the most heralded women’s basketball players in collegiate history. She visited him often throughout the years, as well as sending him letters and books as he fought for his freedom; ultimately, she became a strong voice for prosecutorial changes. She stunned the sports world when she announced in February 2019 that she would step away from her career in women’s basketball, in part so she could help Jonathan in what they hoped would be his final appeal. In March 2020, his conviction was overturned by a state judge in Jefferson City, Mo. In this inspiring memoir, the couple will explore their unwavering faith, their deep connection, and how Maya stepped away from basketball to pursue justice both to prove Jonathan’s innocence and inspire activism in others. Just like Maya and Jonathan asked themselves, readers will ask themselves one of the most important questions they can after reading this book: “Am I living out my purpose?”


Maya Moore Irons is a basketball icon—a two-time NCAA champion, two-time Olympic gold medalist, four-time WNBA champion, and WNBA MVP. After capturing back-to-back undefeated national championships in 2009 and 2010 at the University of Connecticut and captaining the team that set the NCAA record for most games won in a row (90), Maya was the NCAA Academic All-American of the Year and drafted #1 by the Minnesota Lynx in the 2011 WNBA Draft.

As 2011 WNBA Rookie of the Year and an All-Star starter, Maya helped her team capture the franchise’s first WNBA Championship only five months after graduating from college. That spring, she added EuroLeague Champion and Spanish League Champion to her resumé, and in the summer of 2012, she captured Olympic gold with Team USA. In 2016, after winning her third WNBA title and being named MVP of the WNBA All-Star Game, Maya became the first pro athlete (man or woman) to ever notch three titles—ROY, All-Star MVP, and League MVP—in only five seasons of play. In 2017, she was again named All-Star MVP and led her Minnesota Lynx team to another WNBA Championship, their fourth in seven years. She followed that in 2018 with her third consecutive All-Star MVP award and shocked the world after that season when she walked away from the game.

In February of 2019, Maya revealed that she would miss the upcoming season to focus on family and ministry dreams. Later that year, in a New York Times feature, Maya first went into detail about Jonathan Irons and his wrongful imprisonment. She later opted to miss the 2020 season to continue focusing on Jonathan’s case and was ultimately successful when his conviction was vacated in March 2020, and he walked free that July.

Maya has since come to be recognized as one of sport and culture’s most important social justice icons.


Jonathan Irons was just eighteen-years-old when he was wrongly convicted by an all-white jury for a crime that occurred when he was sixteen. With no physical evidence tying him to the crime, Jonathan was handed a fifty-year prison sentence, of which he served twenty-three years. After a winding, yearlong effort by Maya Moore, her family, and other supporters, Jonathan was finally released in July of 2020. The next day, Jonathan proposed to Maya, and weeks later, they were married.

Together, Jonathan and Maya are dedicated to using their now shared platform and social action nonprofit, Win With Justice, to raise awareness and advocate for issues surrounding criminal justice reform, the important role district attorneys play in the judicial system, and the power of each individual to live out their purpose and impact change.

To learn more about Maya and Jonathan’s efforts, visit www.winwithjustice.org.

“Maya and Jonathan’s story is truly inspiring. Love and Justice is about faith, sacrifice, and perseverance in the face of seemingly insurmountable odds. It’s also a powerful reminder to challenge injustice when we see it.”—Michael Jordan

“Maya’s leadership serves as an architect in offering a blueprint for groundbreaking activist work. Her commitment, grace, and dedication are what helped propel many of the movements we see sweeping the country today. What she and Jonathan have given us is a gift and will affect generations to come.”—Megan Rapinoe

“One of sports’ greatest champions, with more power and influence than she ever cared to admit, crossed paths with one of America’s forgotten Black sons, wrongfully incarcerated for life. A one-in-a-billion story meets a one-in-eighty-one statistic. For most of us, that would’ve been a one-time meeting; we’d walk away with some tears and a prayer, maybe some words about how messed up our country’s broken systems are. But in this greater love story, one of the world’s greatest kept going back, ultimately choosing to lay her life down for her friend. In joining his fight for justice, dignity, and freedom, they won a future more precious than either of them could have imagined. Maya and Jonathan’s story is powerful, their sacrifice is challenging, and their work has only just begun.”—Kyle Korver

Love and Justice: A Story of Triumph on Two Different Courts (Hardcover)